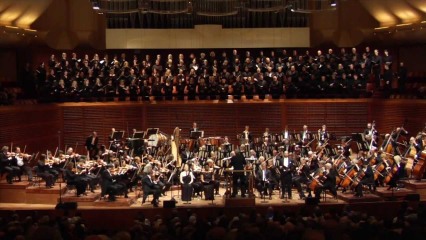 The modern Chinese orchestra was first developed out of Jiangnan Sī Zhú ensemble (江南丝竹, silk and bamboo instruments based ensembles formed in regions south of the Yangtze River) in the 1920s into a form that is based on the structure and principles of a Western symphony orchestra but using Chinese instruments. The orchestra is divided into four sections – wind, plucked strings, bow strings, and percussion, and usually performs modernized traditional music called Guó Yuè (国乐, lit. national music). You might hear other titles more often like Mín Zú Yuetuan (民族乐团) or Mín Zú Yuè Duì (民族乐队) in mainland China, Zhōng Yuè Tuān (中乐团) in Hong Kong, Huá Yuè Tuán (华乐团) in South East Asia, or Guó Yuè Tuán (国乐团) in Taiwan. The “Yuè Tuán” means orchestra, and sorry for having so many characters all referring to “China”, don’t be confused, all these names share the same meaning! 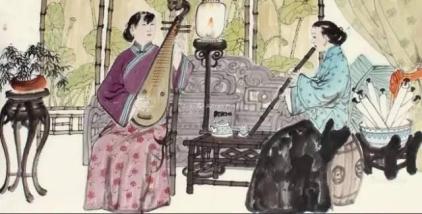 The origin of modern Chinese orchestra dates back to early 20th century, when a number of Chinese musicians became interested in improving traditional Chinese music. A notable early pioneer was Zheng Jinwen (郑觐文, 1872-1935) who founded a music institution in Shanghai in 1921, the Great Unity Music Society (大同乐会), to develop and maintain Chinese music in the modern age, recreating ancient music and instruments as well as creating new ensemble music for Chinese instruments. Zheng experimented with increasing the number of player in a Jiangnan Sī Zhú ensemble to 35, and separated the instruments into different sections. He began to standardize the instruments, for example inventing methods to resolve the problem of traditional instruments such as Dizi (笛子) where the fundamental tuning for various instruments may be different. He also updated traditional instruments such as the sheng by increasing the number of pipes to increase its range and allow it to play harmony and chords. In the past, each player may embellish their parts at will, but in this new orchestra, Zheng wrote specific music for each instruments or sections like what Western orchestra composers do. One early signature tune of the music club was Spring Flowers on Moonlit River (春江花月夜), arranged for the ensemble by Liu Raozhang in 1925 based on an older tune for pipa which we discussed before. 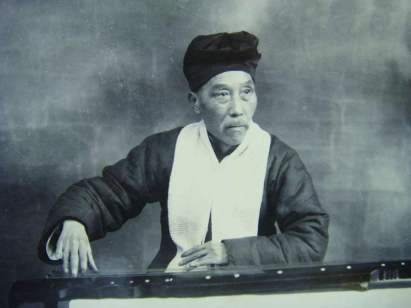 With the efforts of the united group of musicians, artists, composers and performers, modern Chinese orchestras rose significantly during the past century and there existed some famous and notable orchestras that even went international: China Broadcasting Chinese Orchestra, founded in 1953, is a major Chinese orchestra based in Beijing. A compilation of the orchestra’s music entitled Phases of the Moon: Traditional Chinese Music, produced by the China Record Company and released by CBS in 1981, was one of the first and best-known recordings of Chinese music in the West. 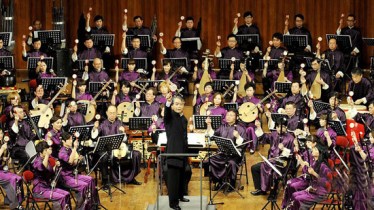 Shanghai Chinese Orchestra was the first large-scale modern orchestra of traditional instruments in China founded in 1952. It performed in more than 80 cities in China, as well as in more than 30 foreign countries. In 2001 and 2003 it performed two Chinese New Year concerts at the Musikverein in Vienna. It achieved a number of world records as recorded by Guinness Book of Records. In 2001, Hong Kong Chinese Orchestra recorded the largest number of people performing the erhu at the same time with a thousand players performing at a mass performance entitled Music from a Thousand Strings. 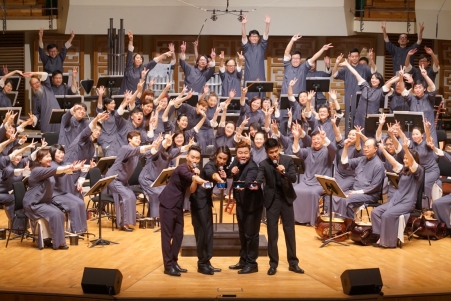 You may wonder, so China doesn’t have orchestras, or bands before 1920s?

Of course not! Ancient Chinese orchestras existed since the Shang Dynasty (1600 – 1046 B.C) and was used at royal court and later during Confucian ceremonies. Click here to see what instruments the ancestors play back at that time!

Aileen & Norman co-founded Interact China in 2004 with specialization in fine Oriental Aesthetic products handmade by ethnic minorities & Han Chinese. Having direct partnerships with artisans, designers, craft masters and tailors, along with 15 years of solid experience in e-commerce via InteractChina.com, we are well positioned to bridge talented artisans in the East with the rest of the world, and directly bring you finely selected products that are of good quality and aesthetic taste.

P.S. We Need People with Similar Passion to Join Our Blogging Team!
If you have passion to write about Oriental Aesthetic in Fashion, Home Decor, Art & Crafts, Culture, Music, Books, and Charity, please contact us at bloggers@interactchina.com, we would love to hear from you!

View all posts by Sari Xu

Our Vision | Our Approach | Our Team